Plumstead Common is situated in South London in between Plumstead and Woolwich. At the extreme western end of the Common, near the War Memorial and Adventure Playground is a small clump of trees beneath which stand a number of rocks and boulders of "Puddingstone" - a silica cemented conglomerate of water worn flint pebbles. Puddingstone is normally found in Hertfordshire but small quantities can be found anywhere within the London Clay. The outcrop at Plumstead is the largest outside of Hertfordshire.

Free on street parking is available nearby in Blendon Terrace. By Bus, Stop T (Kirk Lane) in Plumstead Common Road is right next to the area. Bus Routes from the nearest Overground Stations are: 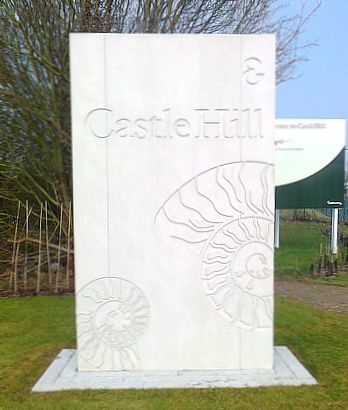 This is a new housing development next to Ebbsfleet International Station where, in 2003, a partial skeleton of a straight-tusked elephant, Paleoloxodon, along with remains of mammoth, lion, hippo, and hyena were also unearthed. To commemorate these finds, a themed children's playground has been constructed which will form part of a new country park next to the estate. The playground is open from dawn to dusk each day and is suitable for children aged 2-14 years of age.

The "Ebbsfleet Elephant" has been widely used across the housing estate as can be seen in the photographs below:-

The centrepiece of the estate is a full size sculpture of the "Ebbsfleet Elephant" and a calf constructed from timber framing covered in metal wire:

The nearest railway station is Swanscombe (Southeastern Railways) about 3/4 mile North. Driving, the estate is just off Southfleet Road (Postcode for Sat-Nav users is DA10 0DF). Parking is however very limited on site.

The site of a disused gravel quarry, Swanscombe Heritage Park is a registered SSSI (Site of Special Scientific Interest) where the remains of "Swanscombe Man" - a descendent of Homo heidelbergensis - were discovered in 1935. A replica of the Swanscombe Man skull (dated at 250,000 years old) can be seen in the foyer of Swanscombe Leisure Centre - the original is in the Natural History Museum, London. The site is also famous for the tens of thousands of flint implements and ice age mammal fossils that have been found there.

As you enter the Heritage Park itself from Craylands Lane you are confronted by a tall statue of a flint hand-axe modelled on one actually found in the park. The entrance to the trail that leads to the Swanscombe Man Skull site is to the left of the statue.

It is only a 5-10 minute walk from the start of the trail to the commemorative stone at the skul site. The trail is made of compacted stones/cement and so is suitable for wheelchairs/prams/pushchairs and every few yards stone paving inserts display engravings of "Past Swanscombe Residents":-

The Skull Site itself is disappointing as vandals have stolen some of the steel descriptive plates and vandalised others. Also, as we found with the Mantell Trail markers through Sussex, engraved steel plates do not weather at all well and so some of the illustrations and text are starting to become faint/illegible.

Swancombe Leisure Centre is in Craylands Lane, about a 1/2 mile south west of Swanscombe Station, and is open seven days a week 9.30am - 11pm Monday to Saturday, 10am - 11pm on Saturdays on Sundays - although the Heritage Park itself is open anytime. Telephone 01322 385183 for further information.

Residing within the Paradise Park Garden Centre in Denton, just outside of Newhaven, this attraction caters for families with something for young and old alike. From rocks, fossils, minerals, prehistoric tools and informative display boards for those interested in geology - there is even an earthquake simulator to stand on! - to greenhouses full of plants, trees and shrubs from all over the world (many of which are living fossils) to colourful dinosaur replicas and a dinosaur themed playground.

The entrance to Planet Earth is just to the right of the garden centre.

There are many corridors of displays covering all aspects of geology including evolution, dinosaurs and minerals (see below):

The entrance to the greenhouses is an impressive replica of a dinosaur skeleton set in its' rock matrix!

For younger visitors, there is a walk through life size models of dinosaurs and prehistoric beasts along with a dinosaur themed playground which is outside the garden centre cafe.

A good place to visit. Plan at least a couple of hours - longer if you have small children! One thing to watch is that the cafe and toilets are in the garden centre and so you need to leave the museum to access them. Getting back in is not a problem - just a long walk!

For further information, including latest prices and opening times, visit their Website

Also known as Horse Crag - because horses were used to bring the copper ore out of the mine through an adit known as the "Horse Level" - this is called a "mixed" mine because it has been worked both for copper and slate. The mine adit is over 3,000 feet long and was used to connect with the Three Kings Copper mine almost a kilometre away. The adit was built by the Coniston Coppermines Company around 1848 with the Penny Rigg Copper Mill added at the mouth to process the copper ore. Copper mining ceased here around the turn of the 20th century. The mine re-opened in 1933 for the quarrying of slate but this too ended in 1938. It was re-opened for the last time in 1989 and continued as an underground closehead (underground quarry) for slate until the mine closed for good in 2001.

The remains of the copper mill are extensive and include settling pits, smithy and office buildings, various huts and gunpowder magazines; together with buildings that were used for slate mining. The mill was powered by a 32' diameter waterwheel that was fed by water from a leat all the way from Crook Beck, higher up the valley. The waterwheel pit can still be seen although the waterwheel is no longer present.

Yewdale Beck runs along the bottom of the Tilberthwaite Valley and rain run off from the mine discharges into this via Crook Beck. Amongst the rocks and boulders that litter the floor of Yewdale Beck are deposits of river gravels comprising rock fragments from the Borrowdale Volcanic Group - Rhyolites, Slates, Andesites and Quartz - that make up the fells to the west of Coniston. Worldwide, these types of rock are the largest source of copper ore and supply nearly 60 percent of all copper mined even though they typically contain just 0.4% - 1.0% copper.

The photomicrograph below shows copper ore recovered from the above sample. Weighing only 0.03g - from 179g of gravel - this represents a copper content of just 0.02%!